The power of purpose-driven marketing

As consumers become more socially and politically engaged and the focus on sustainability and company ethics grows, brands have an opportunity to build loyalty with their customers.

As the United States deals with the aftermath of a contentious election, civil unrest, protests and a pandemic, more brands have pivoted toward purpose-driven marketing.

Sixty-four percent of consumers say they’ll buy or boycott a brand depending on its stance on a social or political issue, according to the 2020 Edelman Trust Barometer. And the 2020 Strength of Purpose study from communications agency Zeno Group found that when a brand has a strong purpose, consumers are four times more likely to purchase from the brand. Not to mention that brands with an active purpose outperformed the stock market by 134% and saw their share of wallet multiply by nine, according to Meaningful Brands 2019 by Havas Media Group.

Purpose-driven marketing strengthens your brand authority and credibility, and it can open doors to new opportunities with companies, customers, collaborators, influencers and investors who share your values. Having a clearly defined mission, investing in that purpose and living it every day can strengthen an entire organization and build a strong connection to your target market.

“Marketing communications are expressions of actions we’re taking as a brand. It’s not just saying it, but doing it.” —Stephanie Sotelo Perdue, Vice President of Brand Marketing, Chipotle

“One of the benefits of purpose-driven marketing is that it allows a brand to express its values. And when it becomes really relevant to consumers is when you find that intersection of shared values,” says Stephanie Sotelo Perdue, vice president of brand marketing for Chipotle. “When a customer cares about what you stand for—wow, what a much deeper, longer-lasting relationship than just buying something.”

What is purpose-driven marketing?

Generally speaking, purpose comes in two forms in marketing. While some companies are founded with a specific purpose or mission in mind, other brands align themselves to a purpose when the opportunity arises. One purpose-led marketing approach is not inherently better than the other; it’s simply a matter of commitment. 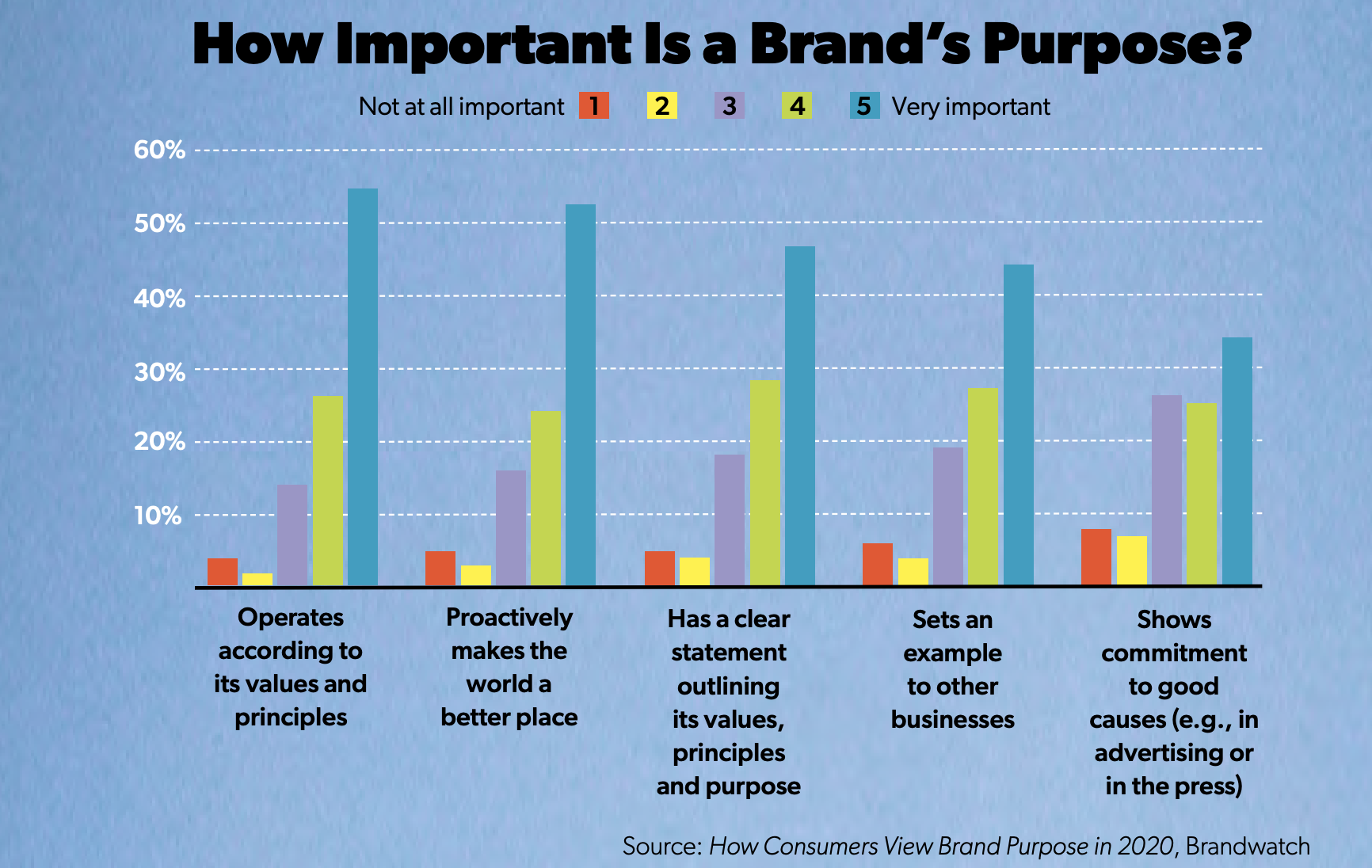 Not all brands fall neatly into one of the above categories. Dove, for example, started with a timely purpose-driven marketing campaign based on current trends in the beauty market but ended with holistic purpose-driven branding that lasted far beyond the initial scope. Its Real Beauty body-positive campaign launched in 2004, focusing on the celebration of body types not traditionally represented in advertising, inclusive of all shapes, colors and sizes. The campaign message resonated with consumers: Sales for the brand jumped from $2.5 billion to $4 billion in the campaign’s first 10 years. But Dove didn’t stop there. In 2019, it partnered with TV producer Shonda Rhimes, Getty Images and Girlgaze to launch the #ShowUs stock image library, which features photographs of women taken by women and nonbinary photographers. According to Dove, 60% of women say they’re more likely to purchase products from brands that use images from the #ShowUs library. To this day, the messaging of acceptance and self-love is still front and center on Dove’s homepage.

A brand’s purpose must come across as genuine—which is why timely campaigns can be a risky strategy. If brands don’t practice what they preach, consumers view it as a cynical attempt to leverage a politicized issue for commercial benefit.

“Last summer, we saw brands do purpose-driven marketing well and brands do it very poorly,” Levin says. “You don’t get to dip your toe in and say, ‘Hey, I’m here for you!’ and then run away again. Consumers will instantly sniff that bulls**t out.”

With the rise of social media, holding brands accountable has never been easier or had such reach. Dozens of companies, from Nordstrom to Netflix, released statements against racial injustice in support of the Black Lives Matter (BLM) movement, and consumers were quick to rebuke brands they felt were being opportunistic. For instance, sports teams like the Chicago Blackhawks and the Washington Redskins (which has since changed its name) were criticized for having racist names and logos despite claiming to show unity with the larger cause.

If brands have a purpose—or want to show purposeful intent when they connect with consumers—they need to align marketing to authentic values and operations. “You have to dedicate yourself to your purpose,” Levin says. “You have to show consumers that you’re willing to take risks and support them, and then repeat this over and over and over again.

Starting at the top

Creating and fulfilling a brand’s purpose or taking a timely stance on social issues most often falls on marketing and executive leadership. According to Gartner’s CMO Strategic Priorities Survey, 95% of CMOs believe companies should take the lead on finding solutions to key societal and cultural issues. And according to the 2021 Edelman Trust Barometer, 86% of customers expect CEOs to speak out on the impact of the pandemic, job automation, societal issues or local community issues.

The first step toward building successful purpose-driven marketing strategies is to examine company practices to ensure they align with the values your brand wants to convey to the public. This requires a willingness to commit to organizational changes; a brand’s purpose can’t pay lip service to a cause. The vast majority of Gen Zers (93%) say that if a company makes a commitment, it needs to follow through, according to the 2019 Porter Novelli/ Cone Gen Z Purpose Study.

Leadership should be thinking about things that the company will be dedicated to championing five years or more down the road, Perdue advises. “This is a journey, and you have to continue to make those small steps every year to continue to make an impact,” she says.

Determining a brand purpose also involves taking a close look at employee values. What are they passionate about? What truths do they hold dear? Will they support the cause in question? Can your company uphold its promises to make a difference? “A lot of people don’t realize that an organization’s biggest asset is its people,” says Jennifer Mahone Rightler, vice president of diversity and inclusion at Epsilon. “If you can’t tap into what drives them and what motivates them, then you’re not going to have a purpose-driven culture; you’re not going to have a culture that’s aligned or attached to anything.”

Brands that authentically align their messaging with their values can stand out from the competition while leading by example in their industry.

“A purpose can lead to not only relevance but also differentiation,” Perdue says. “And for Chipotle, it’s about letting people know that we are concerned about the future of food and really taking responsibility for the impact on the environment. We know that our customers are choosing us for this reason.”

"If you’re trying to create a brand for everyone, you are essentially creating a brand for no one.” —Alex Jarrell, Co-Founder, Nom Nom

Because the average age of a farmer is 59, Chipotle focuses on supporting the industry’s next generation to allow farms to thrive for years to come. The fast-casual chain’s seed grant program gives young farmers a start of $5,000 to help them get a farm of their own, with 80% of awards going to minorities. Chipotle also helps its farmers secure long-term contracts.

“The marketing communications are expressions of actions we’re taking as a brand,” Perdue says. “It’s not just saying it, but also doing it.”

While efforts to align marketing with organizational values may require extra time, resources and effort on the part of leadership, the payoff is well worth it: A strong sense of purpose leads not only to employee satisfaction and brand advocacy, but also customer loyalty.

“We try to figure out what is going to be the best experience for our customers,” says Alex Jarrell, co-founder of Nom Nom. “What’s going to drive us towards our mission? And of course, what’s going to end in the best business results? We evaluate all of those factors when we consider a new product or experience.”

Even with the best intentions, brands face the very real possibility of not hitting the bull’s-eye when it comes to purpose-driven marketing. “Taking any action comes with risk in an increasingly polarized society,” according to the Gartner report.

Facing the fear of a misstep

Brands might have the best intentions, but their efforts can miss the mark. As mentioned, Dove has made a consistent effort to change how beauty products are marketed to women. But in 2017, the brand ran a Facebook ad with the intent to celebrate diversity and convey the message that Dove body wash is for everyone. In the ad, women of various races wearing skin-toned T-shirts transformed into each other. One segment showed a Black woman turning into a white woman, which many people felt was racially insensitive. Swift consumer backlash followed.

Dove took down the ad and released an apologetic statement saying it “missed the mark in representing women of color thoughtfully.” By focusing on authenticity in future ads, the brand was able to rebuild trust with consumers.

Although missteps are possible, marketing leaders believe that braving the possibility of failure is worth the effort. According to Gartner, risks “are typically offset by having furthered or fulfilled the organization’s or brand’s purpose. On the commercial end, the risks are outweighed by the demonstrable benefits of increased trust, willingness to purchase and recommend brands, and employee engagement with companies that lead in effecting change.”

For example, Nike’s advertisements featuring former NFL quarterback Colin Kaepernick for the 30th anniversary of the “Just Do It” campaign in 2018 sparked both praise and controversy. Some consumers saw the ads and encouraged people to destroy Nike goods.

But instead of cowing to a small-but-vocal audience, Nike forged ahead. And the brand had good reason to: Sticking to its values led to a boost in sales, and Kaepernick’s True to 7 Nike sneakers sold out within minutes. If Nike’s earlier actions weren’t clear enough, the brand also took a stance against racism with a socially conscious BLM ad campaign in 2020 that featured a new take on its tagline: “For Once, Don’t Do It.”

For Nom Nom’s Jarrell, the biggest risk in taking a stand is alienating customers. “We’re still a small business, so any time you put your heart out there and it doesn’t get accepted, that’s purpose-driven marketing’s biggest risk,” she says.

To overcome that, Jarrell reminds herself that she knows her company won’t appeal to every pet owner. “If you’re trying to create a brand for everyone, you are essentially creating a brand for no one,” she says. “You’re not going to be successful when you don’t really resonate with anyone because you’re trying to please everybody.”

The necessity of taking a stand

With the right internal-external alignment and a true commitment to progress and transparency, any organization can meet consumer demands for purpose from the brands they choose to engage with. It may take extra effort and perhaps a new kind of organizational vulnerability. But at the end of the day, it’s the marketer’s job to anticipate consumer wants and act accordingly—in advance or on the fly. 2020 was an unequivocal shift for many. Is your brand prepared to handle what the next year may bring?